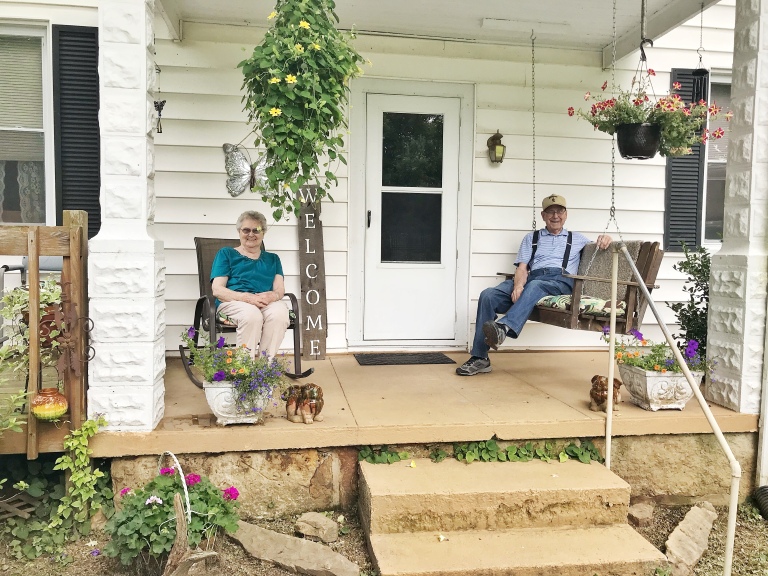 You guys know my most favorite place in all the land is my grandparent’s farm. It has been a soft place for me to fall all my life. And so, during this scary and uncertain time, a time where we can’t hop in the car and drive the four hours down there, I’m gonna write about and relish in our last visit, just a few weeks ago.

We always spend Spring Break on the farm. This is a tradition that goes way back to my childhood. But, this year we were going to spend it in the Smoky Mountains. With our oldest being 15 and it hitting us that we don’t have that many more Spring Breaks with her, we decided we would do something different, see new things, have new adventures. It broke my heart a little, but I told the kids, if we aren’t going to the farm for Spring Break, we are going to spend a weekend down there a few weeks before. Otherwise we would have gone from December to April before we saw Grams and Gramps again, and now hindsight, it could have been so much longer. Thank God we took that second weekend in March to spend it with them.

One of my favorite things about visiting my grandparent’s during Lent is that we always go eat fish on Friday. I’m not Catholic, but they are. Devout. As were their parents, their parents parents and so on. And so, we headed to town, to the Knights of Columbus to have fried fish, coleslaw, green beans and baked potatoes. That same K of C that my grandpa went to after work every day. To play cards, drink beer, and wait for my dad to get out of whatever practice he had at the time before they headed back to the farm together. At 94 years old, he knows most everyone in there, and everyone in there knows him. There is something so comforting,  in being with people who have roots nearly 100 years deep in their community.

On Saturday I cooked with my aunt and Grams. We threw a big vegetable beef soup together and an apple cobbler. I have never really loved cooking. I never paid attention when my mom cooked. I am not a super skilled cook. I get food on the table for my family. But, as I poured each ingredient in the pot, with my grandma standing right there, it hit me, I have never REALLY been a part of that precious, blessed, and oh so educational, generational cooking. I think if I had, I would enjoy cooking more. I would KNOW more. I would not feel so clueless in the kitchen. It’s like writing a recipe book in your head and your heart as you witness decade upon decade of knowledge that gets folded into every dish.

That night as we sat around the table, I got to do what I love the most, ask questions. It started out with, “Gramps, tell me what the meals looked like when you were growing up”…and the stories started to flow. Gramps is a born story teller. He is entertaining. He uses his hands. He pauses. He chuckles. He lights up when he tells a story. I could listen to him for days. He told me they rarely had meat. Squirrel hunting was his favorite time (except the time he got chiggers, in some terrible spots) because when they killed a squirrel, they had meat to eat. On laundry day his mom always put on a pot of beans.  Her house ALWAYS smelled like bread. They had boiled potatoes with nearly every meal. His favorite meal of all time that his mom made was meatloaf. His family ran a general store. The farmers would bring ham hocks in for his dad to sell. Grandpa said they weren’t always cured well. Those ham hocks didn’t get sold. Instead, his dad would take a knife, pick out the maggots, or skippers, as they called them, and they would eat the ham. Bologna would sit on the counter all week, they didn’t have a refrigerator. By Sunday, they’d finish it off, after his mom scraped off the mold and fried it in the pan.

It’s a life that was hard for me to fathom, until now. But, in this time where we don’t want to get out and go to the store, where the store may not have what we need anyway, it’s becoming so crystal clear to me why my grandpa doesn’t waste a thing. I have seen him bite a peppermint in half, pop one half in his mouth and wrap the other half up and put it back in his pocket. More times than I can count, I’ve witnessed him scraping food off of other people’s plates after they finish eating onto his own, because he can’t bear to see food go to waste. My grams washes out cans to send to recycling. They have a pile of cardboard they recycle as well. Any scraps get composted. Whatever ends up in the trash, is truly trash. The Great Depression marked my grandpa. What we are facing now, will mark all of us.

What I wouldn’t give to be down there, sitting around the living room, as we all listen to music together on Gramps’ iPad. Playing our favorite songs for each other. The surprise and pride I see on their faces when Brady says he wants to hear some Johnny Cash or Willie Nelson. The groan that comes from Grams when Gramps wants to listen to I’m So Lonesome I Could Cry for the millionth time. We all chuckle. They are the cutest. They love music. I love that it is such a part of their lives, to this day.

We always go down for Easter. We always play music and sing. So many musicians in my family. Such a rich tradition of music that goes back generations. That’s a blog post for a later day. I will miss ALL of that this year, and they will too. We will see them again. We will sing for them again. We will eat fish on Fridays with them again. Just not this year. In the meantime, when life gets too overwhelming. The news too sad. The future too bleak, I will close my eyes, take some deep breaths, and go to that sacred place, where life is sweet, the air is fresh and two of the best souls who have ever walked the earth, sit on the front porch, grinning, waiting for us to return.

Sending prayers for good health, safety and love to all of you. We will get through this, together.

As always, thanks for reading.