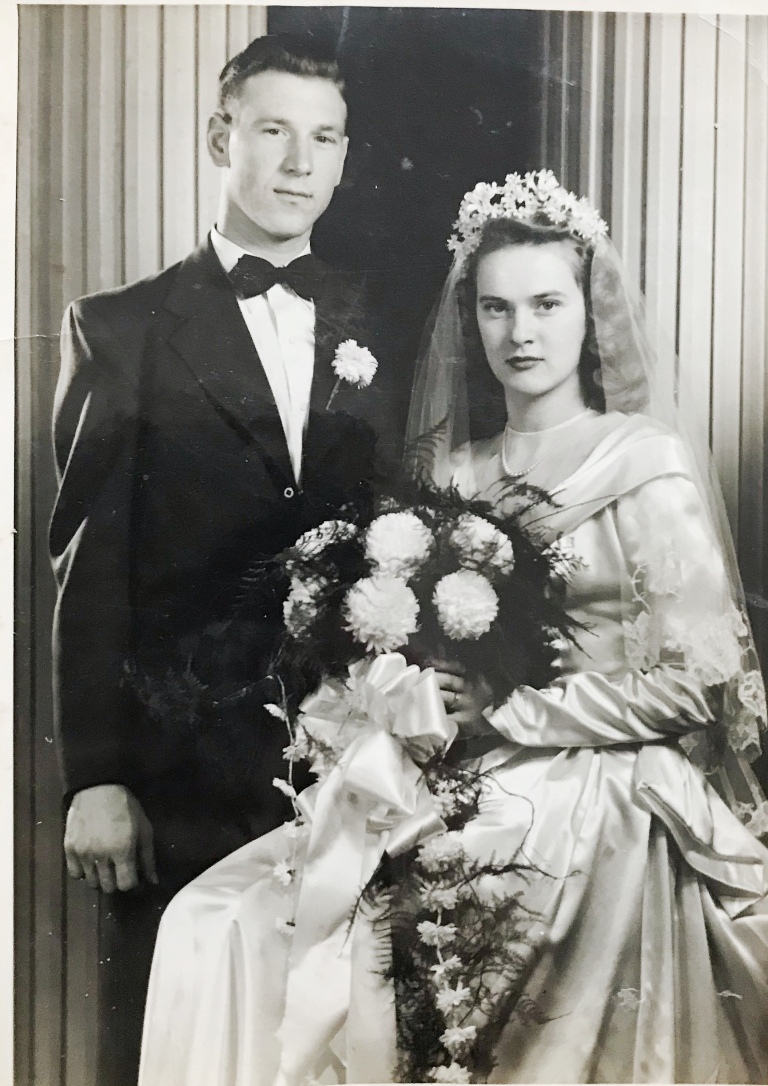 After all these years together

After all that we’ve been through

Still leaning on each other…

A love story that has spanned SEVEN DECADES. My husband and I just celebrated our ten year anniversary. We will never see 60 more years together unless he lives to be 105 and I live to be 98. Seventy years is RARE, even in the best of marriages. It takes getting married young, staying married and living a long life. It is exceptional. Unbelievable. AMAZING. It IS my grandparent’s love story, Ovalee August and Dorothy Ann. We sat down around their kitchen table last week, drinking coffee and reminiscing, so that I could hear their story and then retell it. I hope I do it justice…

They met at a Catholic Youth Organization dance. Grandpa said he “looked at the crop and she was the prettiest one out there.” He asked her to dance and THAT was the beginning. Over the next two years they would see each other at the CYO basketball games Grandpa played in and they went on a few double dates.

I asked Grandpa when he knew she was the ONE and he told the same story I’ve heard him tell before. After one of his baseball games, he headed to see my grandma. She lived on the same farm they still live on today. He was starving when he got there, so Grandma grabbed a chicken, wrung it’s neck, plucked it’s feathers, fried it up in the pan AND EVEN MADE GRAVY. I think the gravy sealed the deal. He just grinned ear to ear as he talked about that day.

Still pretty as a picture

Still crazy over you

Grandma went to school her senior year until 10:30 in the morning, left there to go waitress at a restaurant right across from General Electric to work the lunch shift and then headed to her second shift job at GE. A few months after Grandma started working there, GE needed a position filled by a man who could also play on their basketball team. Gramps was working in Evansville at the time (an hour away), had boarded the bus in Tell City to head to work that day, when his cousin climbed on the bus, shouted his name and said GE needs ya for the basketball team. Gramps said he thought about it for a minute, then climbed off the bus. When Grandpa walked into GE that day and was taken on a tour, he walked past Grandma and a couple other middle aged woman who worked beside her. One of them said “he can put his shoes under my bed anytime.” Grandma replied, “He’s my boyfriend.” I love the way she smiled as she said that line to me.

I asked Grandpa how he proposed. He said  it went something like this…”well, now that we both have jobs, we might as well get married.” Grandma just chuckled, listening to him and said, “we were broke.” A month later, on November 25, 1948, they were married.

It was a morning wedding. Grandma wore a dress she and her sister took the Greyhound bus to Evansville to buy. She carried a bouquet of chrysanthemums made by the florist in Tell City, named Jim Mosby.  The ceremony was officiated by Father Olfer and took place at St. Marks, the same little Catholic church where they attend every Sunday to this day. The nuns sang Ave Maria and their closest friends & family stood by their side. After the wedding, everyone went back to the farm for a big breakfast cooked by Grandma’s Aunt Lizzie, followed by a reception at the St. Croix Hall. Music was played by Gramp’s family. His brother Russell played the banjo, his Uncle Everett sang and played the fiddle and his cousin Clyde played the guitar.

In a hundred years from now

I know without a doubt

They’ll all look back and wonder how

We made it all work out

They spent their first night as a married couple at the William Tell Hotel in downtown Tell City. They were given a book the week before by the priest, explaining all the things they would need to know to navigate that first night and so many other nights of their marriage. THEY STILL HAVE THE BOOK. Grandpa said the morning of their wedding, he found Grandma’s dad reading it. Grandma said “that must have been why he was crying.” Grandpa laughed and said, “he knew what was gonna happen to ya.”

Within the year Grandma was pregnant with my dad, the oldest of their EIGHT children. Grandpa said that while she was in labor he got tired of waiting in the waiting room, wasn’t allowed in the delivery room of course, so he headed over to the Moose and told them “My wife’s having a baby. I need a drink.” On his way back, as he was walking down the sidewalk, the doctor yelled out the window of the hospital to him, “IT’S A BOY!” That was September, 1949.

At the time they lived on the farm with Grandma’s dad and his sister, who had helped raise my grandma after her mother died when she was just three years old. Not long after my dad was born they moved to an apartment in Tell City and soon after that they built a little house on a hill not too far from the farm. When Grandma’s dad passed away, my dad, who was seven at the time, and Grandpa said they wanted to move back to the farm, sacred land that has been in our family for over 150 years. Gramps worked at GE until he retired. Grandma stayed home and raised babies.

Grandpa said he has some regrets, the biggest one being, not helping Grandma enough. He would go to the K of C after work, play cards and drink beer, while Grandma was home giving baths, feeding supper, helping with homework. As all of us who have had little ones can imagine, she was utterly and completely exhausted. Eight kids. She was taking care of eight kids. From sun up to sun down. No vacations. No manis/pedis. No girls night out. Oh, and 3,000 chickens. She had to take care of all of them too.

She worked and she worked and she worked. She had to have carried so much resentment. Anger. She said there were days she wanted to walk down that gravel lane and never come back. But, then who would take care of the kids. So, she stayed. She persevered. She is the epitome of self sacrifice. I am convinced she will enter sainthood one day. And, she loved my grandpa. And he loved her right back. It was a different time. Different expectations of men, fathers. She trudged through. They trudged through, and they found better days on the other side.

We’ll go down in history

When they wanna see

How true love should be

They’ll just look at us.

I am so grateful that they never threw in the towel. That they were gritty and dedicated to their vows. That their individual happiness didn’t always come first, but rather what we are all called here to do, and that is to LOVE and to SERVE. There is no brighter example of that than in marriage, especially a strong marriage and most especially in a marriage that spans seventy years. Self-sacrificing love. Unconditional love. A love deeper than the oceans and richer than all the gold. A marriage that made it to Platinum. Seventy years. Eight kids, 23 grand kids, and about a million great grand kids. They deserve ALL of the awards. They’ll settle for cake, and the complete adoration of a whole heap of people. 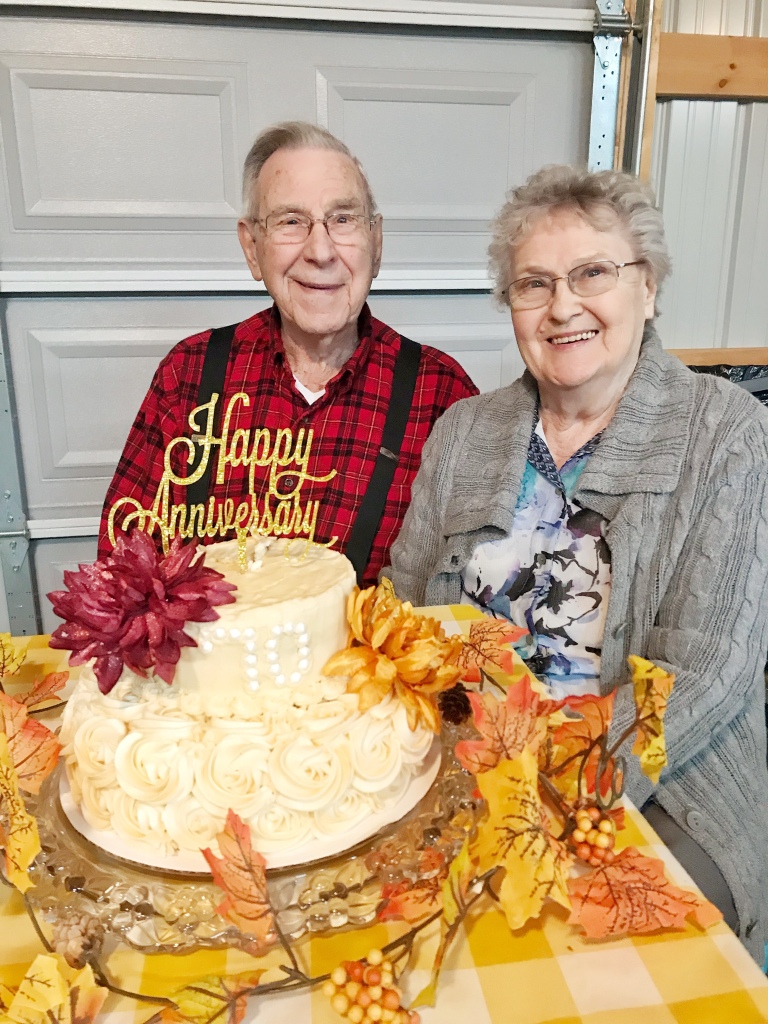 I love them more than words can say. Happy Anniversary to two of the most special people EVER.

P.S. Here’s a video from this past Thanksgiving, when we celebrated their anniversary. It’ll give you all the feels.