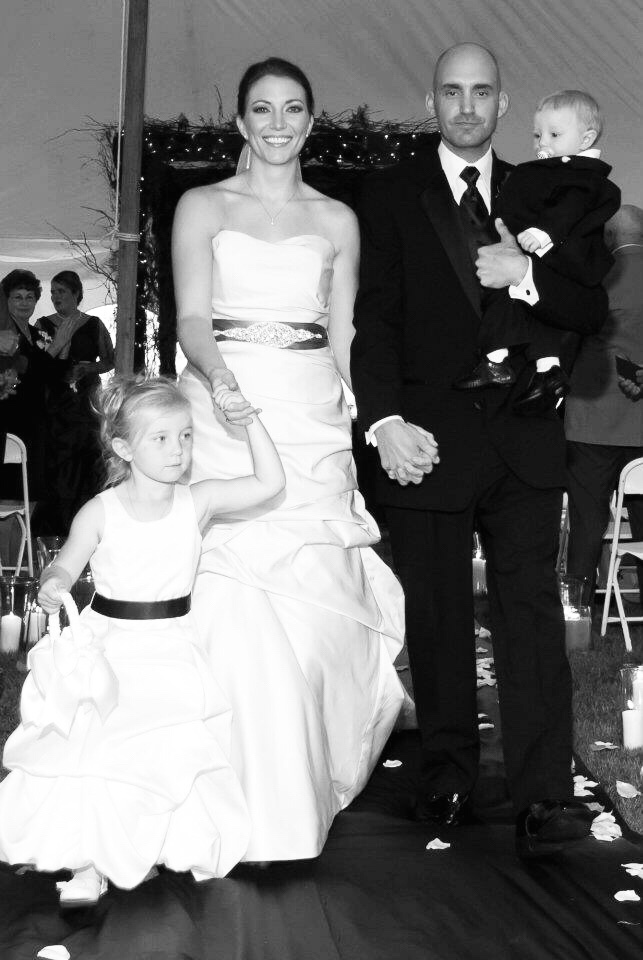 Adoption (a dop’ tion) n. 1.) Building a family through the process of concentrated, dedicated, enduring love, rather than biology.

Nine years ago, this week, my husband adopted my two oldest kiddos. I’m not sure even I understood the depth and magnitude of that kind of commitment and love at the time, in the way that I do now, all these years later. My dad so eloquently described my life, when my husband and I started dating, calling it a “shit storm.” Matter of fact, he said, “does Scott know that your life is a shit storm right now?” The answer is yes. Yes, he did know. And he still said yes to me, and he said YES to Gracie and Brady, without wavering.

My first husband passed away from kidney cancer at the age of 28. At the time of his death we had our oldest daughter Gracie, who was two and I was 38 weeks pregnant with our son. I was as prepared as one can be in that situation and I was ready to tackle being a single parent. Brad had been sick. So. Very. Sick. for most of the ten months after he was diagnosed. I had that amount of time to wrap my head around his diagnosis and his prognosis, which was really, never good. So, when he passed, I was prepared. I knew that it would be a tall order, raising a toddler and newborn on my own, but with an unshakable faith in God and with a lot of grit and determination, I knew I could do it. 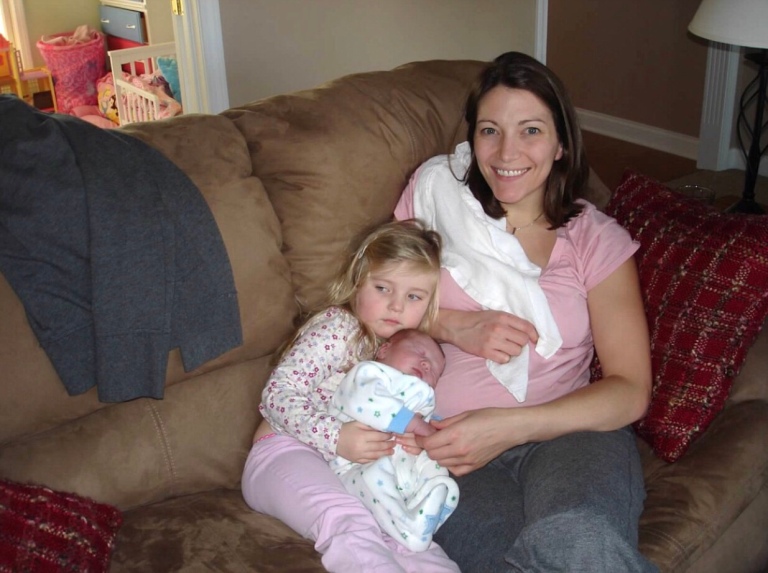 For the first few months after Brady was born, I did do it. Mostly alone. Not that I didn’t have help, but most of my nights at home, were spent alone with my two babies. I didn’t have a husband to shoulder the work. To take some of the load off in the those weary wee hours of the morning when you’ve been up and down all night with a screaming baby. It was all on me, and that was okay. It was not the life I ever expected, but it was the cards I was dealt and if I know anything, anything at all, it’s that sometimes you get a challenging hand, and you just have to make the most of it. That’s what I was doing. Making the most of it. Surviving, day in and day out, and trying so very hard to THRIVE. And then one day…

I will save the story of how Scott and I “met” and fell in love for another blog post. But I will say this…I. Just. Knew. I just knew he was the one. It was not long after Brad passed away, and according to many it was way too soon, but it was MY life and MY decision to move on and I had never felt more SANE than when I told Scott I would marry him. Actually, I think I told him we were gonna get married, he just needed to go buy me a ring, but that’s neither here nor there. Ha.

From the moment we started dating, Scott treated my two kids like they were his own. I will never forget the first time he held Brady in his arms.  He would read to Gracie, and in the first few months alone, he fixed her bike probably 85 times. Gracie was very cautious of him though. She still remembered her “Daddy Brad” very well and was uncertain how she felt about Scott. He took it all in stride. Even the time she threw spaghetti at him at the dinner table. Or the time she kicked the screen out of the window during a temper tantrum. She got in trouble for that, but he didn’t bat an eye. She was a three year old doing typical three year old stuff, PLUS dealing with the loss of her dad. She struggled at times and would lash out, mostly at him. That didn’t keep him from being there, never pushing, never forcing, just being there. The moments she would come around, open up, hug him, snuggle up to him, and finally, finally started called him daddy…I will take those moments, wrapped up in all my heartstrings, with me for the rest of my life. 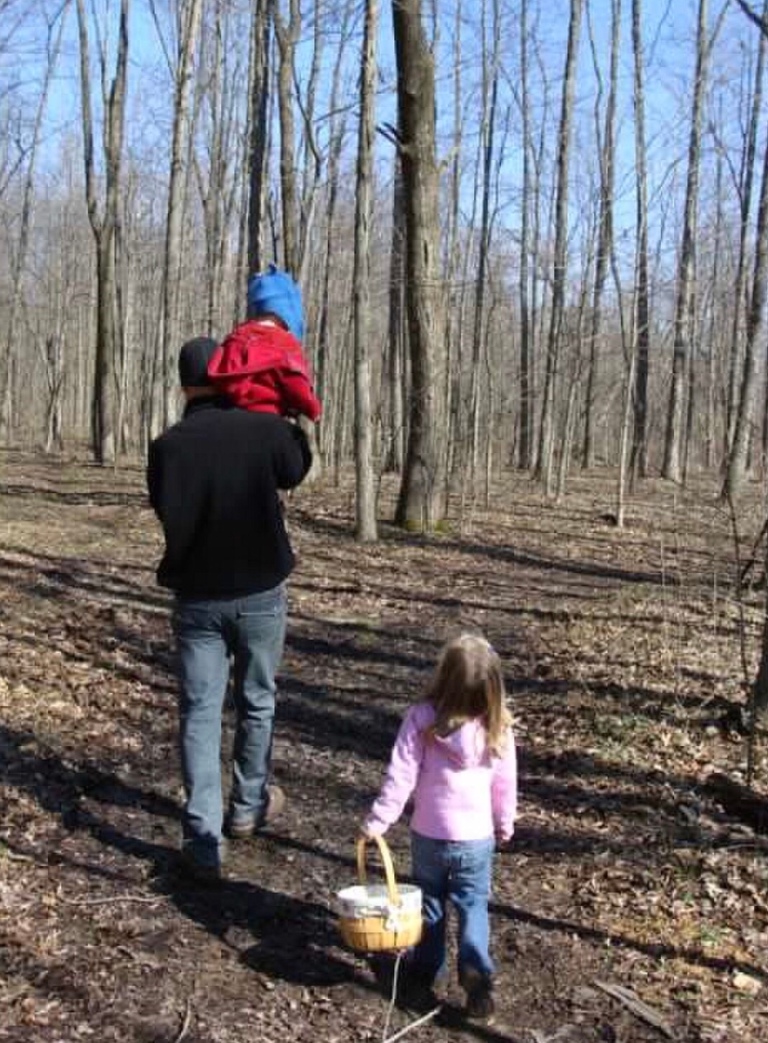 Scott changed dirty diapers. Clipped fingernails. Gave bottles. Took out the trash. Cleaned up vomit. Lost sleep when either one of them was sick. Gave piggy back rides. Fixed toys. Painted walls purple for Gracie and gave Brady a cowboy room. He built them a play set that still stands in our backyard today.

He made me his wife. He vowed to love me forever. He vowed the same thing to Gracie and Brady on our wedding day. He knew that marrying me, meant marrying them. We were a package deal and he never faltered. Never ran for the hills. Never questioned. He just loved. Calmly. Easily. Completely. He became my rock. My solace. The calm to my storm.

So, after we had been married, less than a year, and were expecting a baby girl, Scott told me that he wanted to adopt Gracie and Brady. He told me he never wanted them to feel like they were less than Abby because they didn’t have his last name. He told me he never wanted them to question whether he wanted them or whether or not he loved them like they were his very own. And so, we made it official. They now have both Brad and Scott’s last names on their birth certificates. They belong to both of them. They have a dad in Heaven and a dad on this Earth. I’m pretty certain, both of them think those two kids hung the moon.

Happy Adoption Day to my loves.

One Reply to “{Forever and Ever, Amen}”